How The Shoaling Came to Be

My imagination can take flight at any time, wandering through the thoughts and concerns I have for the project on my work table in my studio. Not a day goes in which I’m not challenged by a work ethic that’s governed by: every action results in a consequence. I’m after provocation and registration. That place in our minds where images provoke and register new thoughts. I want each and every viewer of my art to see the beauty and fragility of Mother Nature’s Fish.

Some days are better than others. The better days have to do with progress on “my work” and resolving all kinds of the “end of the world” obstacles. The other days are when my antennas pick up on setbacks or any new news of negativity regarding our planet’s fish and waters. But the 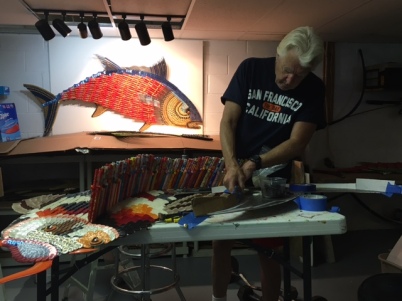 work moves forward and all the things that get my attention filter through me. And when a fish I’m working on speaks to me I feel we’re getting to the soul of the matter, an image that can pierce the mind and heart of viewers, leading them to a greater understanding of what’s at risk now.

People get intimately involved with my pieces because the visual requires investigation; a full investigation. At the right distance a fish might appear to be a painting, but up close they’re three dimensional sculptures and people want to figure how they were made. It is very rewarding watching the work sublimely taking hold with onlookers. Especially to observe their empathetic consideration and insight gained of the beauty and bounty of our endangered seas, oceans, and rivers. Welcome to The Shoaling.

In 1990, I moved to Woodstock and opened the Gypsy Wolf Cantina. We had a 25-year run ending in 2015. Before and during that time I had begun to work on fish art in many

different forms, painting, metal work and now my current pursuit of my work on The Shoaling. Since the early 1980s when I came to NYC and opened Lucy’s I was interested in fish as art as the logo of Lucy’s reflected.

Born and raised in San Francisco, I was always in contact with the ocean in one way or another, not knowing that a childhood incident would inspire me to undertake a curious journey. I was ten, maybe nine, when late one day my friend and I were heading home from the beach in the Sunset District of San Francisco during a Striped Bass run. Meaning the stripers were moving south feeding on anchovies with seagulls following and diving for the leftovers from above. Fishermen following the birds in their cars pulled over and were running to cast their lines in the water. We saw an unattended fishing pole being pulled into the shore break and I picked it up. The grateful fisherman knew there was a fish on it and said it was now mine and he

talked me through landing the fish. In the setting sun’s light the fisherman unhooked the fish and asked if we wanted it. All we could come up with was, Wow! The fish seemingly glowed with its dark green back topping a luminous mauve-tinted silver body with black stripes running from her gills to her tail above her sparkling white belly. Beautiful! He helped the fish revive and then released her back into the waves.

Biography is not an easy art because looking back to long past experiences changes our stories and truths. That being said, two parts of that experience were indelibly marked in my consciousness and have always stayed with me. One was how carefully that fisherman handled the fish. And secondly were the colors displayed by said fish.

I grew into a surfer and started spending a lot of time on and in the ocean. Scuba diving and windsurfing followed later, as well as learning more about fish. That transitory moment when a fish is caught and leaves the water showing us its brilliant disguise always stayed with me. Paradoxically, this luminescence cannot be seen by humans underwater and rapidly fades as the fish dies out of water. Luminescence to me is magical as it is elusive but it was what I was after.

After the opening of the restaurant in Woodstock, I learned how to work with metal and cut fish out of steel which I then fitted with Caribbean beer bottle caps. A delightful neighbor of mine who was the wonderful painter known as “Brock” chided me to start painting fish, telling me that’s where I’d find the answer and in a way I did. I studied and learned about the plight of our over-fished rivers and oceans. Collected books on fish, fish art and read many terrific writers on the subject. But it wasn’t till another neighbor fell ill and my daughter and I were making her a get well painting out of mom’s sewing tin. That’s right, we constructed a fun piece of her and her husband as fish walking their dog, Pumpkin. Right again, we made Pumpkin a fish as well out of hem-holders, safety pins, pins, buttons and sewing needles. My hand inspected every

button in that tin box and I knew this was a “there it is” moment: buttons. Buttons, a simple universal item that is a personal part of everybody on this planet’s daily life. Coming in an infinite variety of shapes, sizes and colors they now became the focus of my new experiments. I taught myself about buttons. I gathered and bought them, dyed them, found different ways to build my fish with them and how to paint with buttons.
At different distances the fish appear to viewer as paintings and when my fish are lit up they’re luminous and meaningful
in their purpose.

To take the aesthetics of fish to a form that accomplishes what was only held in memory moves me forward with my work. But the realities of our rivers and oceans are daunting. When a sailing friend who knows the vastness of our seas says, “It is impossible to comprehend that a hundred million square miles of oceans are being over fished and dying but that’s where we’re headed,” I prefer to think there’s time to turn this around.

On 9/14/1962 the toast John F. Kennedy made to an Australian audience prior to the American Cup Races was read to our science class. They’re wise words I’ve always found hopeful, rereading them or thinking about them.

“I really don’t know why it is that all of us are so committed to the sea, except I think it’s because in addition to the fact that the sea changes, and the light changes, and ships change, it’s because we all came from the sea. And it is an interesting biological fact that all of us have in our veins the exact same percentage of salt in our blood, that exists the ocean, and, therefore, we have salt in our blood, in our sweat, in our tears. We are tied to the ocean. And when we go back to the sea – whether it is to sail or watch it – we are going back from whence we came.”